Temporary anchorage devices, or TADs for short, were approved for use in orthodontics by the Food and Drug Administration in 2004. Since that time, they have been effectively used to treat patients with great success.

Though the name “temporary anchorage device” may sound odd, this appliance is essentially a tiny mini screw, which is made of high-quality titanium.

Titanium is used because of its bioinert nature. This means it will not leak harmful substances into the gums or trigger inflammation around the area into which it was inserted.

Dr. Ryan Redford and Dr. Michael Burke of Burke & Redford Orthodontists in Temecula and Lake Elsinore, California, have been treating orthodontic patients for 30 years and use TADs with regularity. 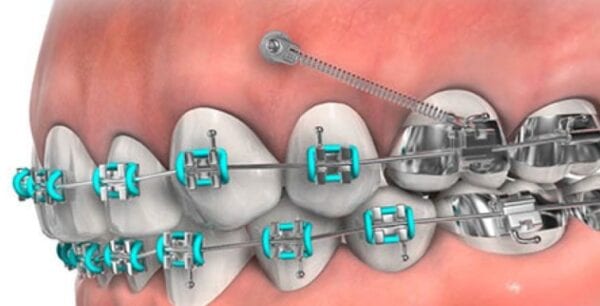 What do TADs do?

While TADs are only used in a small percentage of orthodontic cases, they can make a huge difference in situations where they are indicated.

TADs are essentially an anchor point within the mouth – they are inserted into the alveolar (jaw) bone through the gums at a safe distance from the roots of surrounding teeth. They allow the orthodontist to either inhibit unwanted tooth movement or achieve desired tooth movement without any negative side effects on the position of other teeth or the bite. TADs also allow for certain types of tooth movement that was previously only possible with jaw surgery.

TADs are attached to either specific teeth, to the braces themselves, or to an orthodontic appliance being used. Using light and continuous force, the braces and TAD system move teeth smoothly into the desired final position

In some circumstances TADs can be used to quicken the movement of teeth, while other situations TADs move teeth in a way that was previously done with headgear devices. Sometimes they are used as an alternative to elastic bands. In many cases, these revolutionary mini screws are used instead of a more invasive procedure.

For older kids or adults who have missing permanent teeth (either naturally or because of previous decay), TADs can sometimes be used to shift adjacent teeth into missing tooth sites. This can potentially prevent the need for costly dental implants or bridges and the need for a lifetime of dentistry.

One of the most common applications for TAD use has been in treating “gummy” smiles without the need for jaw surgery.

What is the Process of Placing a Temporary Anchorage Device?

If an orthodontist recommends the placement of temporary anchorage devices within the mouth, a patient can take comfort in that fact that this non-invasive procedure is not only quick but is relatively comfortable.

Following the application of a topical, gel-like anesthetic to the gums in the area where the TAD(s) will be placed, the area will be numb. Needle injections are not needed most of the time due to the strong gel numbing agent used. Then, the orthodontist will gently and carefully insert the tiny screws into place. The patient can expect to feel a pressure sensation during application, not pain. This whole process is completed in a short time, typically a few minutes.

Patients normally acclimate to their new TADs in just a day or so and there is no ongoing feeling of pressure or discomfort after they are placed.

If any soreness is felt immediately following the procedure, some over-the-counter medication should work to help the discomfort subside quickly.

Once treatment with braces, Invisalign, or another orthodontic appliance has finished, the TADs are removed just as easily and comfortably as when they were first inserted.

How to Clean Around TADs

Besides brushing at least twice daily around the teeth and gums as one would normally do, using antimicrobial mouthwash may also help to eliminate bacteria. Gentle brushing around the TADs to keep them free of plaque and debris is also advised.

Poor oral hygiene is the number one cause for TADs to become loose and fail. If any inflammation is noticed around them at any time during treatment, please let the orthodontist know right away.

How Long are TADs Worn?

This question depends on what the TAD is being used for and will be answered by the orthodontist during the consultation. Some patients may need to keep their TADs in for the entire duration of their orthodontic treatment with braces, Invisalign, or other appliances. Other patients may only need these mini screws for a matter of months to correct a specific issue.

As board-certified orthodontists, Dr. Redford and Dr. Burke will closely monitor the patient’s progress with their TADs to determine how long these devices should be utilized.

After their recent introduction into the realm of orthodontics, temporary anchorage devices have served to help orthodontists speed up treatment time and maintain close control over movement of the teeth more effectively. This is all now achieved with minimal discomfort to the patient.

However, before the use of TADs was approved, other less useful means were employed. One of these means was using other teeth as points of anchorage. This traditional method could cause other teeth to move unintentionally or in a direction that was detrimental to the bite.

In other cases, headgear was worn to serve as an anchorage appliance. This was not always successful due to the responsibility that was on the patient to wear their headgear as consistently as possible.

Fortunately, with the innovative TADs, patient participation during treatment is less relied upon and teeth may be moved more accurately, consistently, and comfortably than ever before.

Our doctors keep up with the latest orthodontic technology, so patients always benefit from the least invasive, most modern treatment methods.

If you have any questions about temporary anchorage devices or orthodontic appliances of any kind, we would be happy to help you. Please give Burke & Redford Orthodontists a call at (951) 699-8011. We offer all patients a free consultation with our doctors at both locations in Lake Elsinore and Temecula.

Schedule a Consultation
Scroll to Top